Most Annoying Moments of the Day

Have some patience.   Don't complain complain and complain. 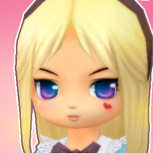 When I have to ban the same person 10 times, please just get a life and stop registering in our forums, do you love it here so much that you can't just stay away?